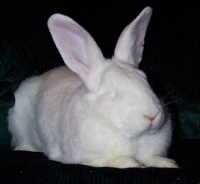 Very sad update..On October 15, 2005, Popeye was sent over Rainbow Bridge. He had gone deaf and was sleeping more. Today, there was just a feeling that it was time to let him go before he suffered from a loss of dignity. Our house is empty tonight. We will leave his story up as a tribute to him.

Yes, he certainly is. This is Popeye, an albino rabbit who (now) weighs around 8 pounds! He is a very lucky rabbit who survived because the person who found him cared enough to try to find help for him.

His history is the following, found on the streets by a good Samaritan, on September 10, 1999, he had a seriously damaged right eye. No one knows how he got on the streets or how his eye became harmed. We only know that when he was found under a truck in a residential neighborhood, he was very ill and in horrible pain. He was skin and bones, weighing in at just 4 1/2 pounds when he arrived. His coat was filthy dirty from oil and mud, he had fleas and fur mites. The infection and street sludge smell was enough to make seasoned RVTs gag. The vet estimated that he had been hopping around with his eye hurt for at least 3 days.

The woman who found him called me and begged for help. She lived in an apartment and was not allowed pets. The other problem was she couldn't pay the $300-600 for surgery and needed after care to remove his eye and save his life. She had taken him to a vet clinic for evaluation, but could not afford the surgery. There was no way to save the eye, it was seriously damaged. If the eye was not removed and antibiotic treatment started right away, he would face a slow painful death from the infection.

All this and I say he's lucky? Popeye was lucky for several reasons, there was a chain of events that saved his life.

The first link in the chain being, I had just adopted a rabbit into a new home, meaning I had space and time to do nursing care on an injured rabbit. However, I simply didn't have the money needed to pay for the surgery. I had just had two other rabbits who had come in ill, the "medical fund" had been barely enough to cover those expenses. So, I had the space and the time, but not the cash to pay for the needed surgery.

The second link was created when I posted on the Internet telling his story and asking for advice from others who had rabbits with an eye removed. Because of that post, three very special people sent money straight to the vet clinic to pay for surgery. Upon realizing that people across the United States were helping pay the costs, the veterinary surgeon I worked for greatly reduced the costs of surgery and meds needed afterwards, thus his surgery was paid for and his life was saved. People all over the world via the Internet added their prayers and good wishes to help him pull through. A kind bunny lover even sent him a box of toys to help him recover faster! 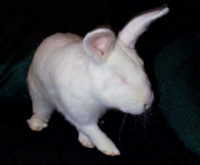 The most important link was Pops had the will to live and the strength to fight for life despite being abandoned by his previous owners and living on the streets in what must have been horrible conditions! It was his will to live that gave all of us the courage to help him fight this battle instead of euthanizing him.

When the woman who found him called me, I was prepared for the worst. After speaking with her about his condition over the phone, I was sure he was going to have be euthanized instead of saved. From the sound of the wound, he was in bad shape. I had her bring him straight to me at the vet clinic where I was working. Pops showed the vet and me that he was willing to give it a try if we were, so we gave him the chance at life. (Hey, what else do you think when here is this rabbit with his eye in such bad shape that the Vet winces and Pops just ignores us to dive for the food dish we placed in his cage?) He never let us down! Despite losing a great deal of blood during surgery, he was bouncing around and wanting to eat almost as soon as he was awake.

Pops is shy and not quite sure he is willing to trust humans at all, but he is more than willing to insist on his daily veggies. He stands there demanding that we feed him SOMETHING if the fridge opens. Ignore him and he lets you know it by thumping and throwing every object within his reach! His favorite treats are Busy Bunny Baskets. He can eat them and throw them, it's the best of both worlds in his mind. Sometimes, while he eats, he will allow us to gently stroke his ears but more often, he flinches and races away. These are some of the very best treat baskets, and the ones you see sold by other rabbit boutiques are often Busy Bunny. 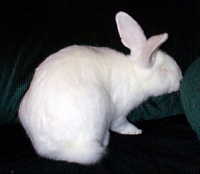 This gentleman has won our hearts and has a home here with Dean and me for life! He gets along just fine without one eye, nothing seems to faze him. He does sometimes have thumping parties in the middle of the night if he hears something. He also really hates strangers to come in the house. Strangers scare him to death and he really starts to thump and bang his stuff around. The one curious thing is that he seems to approach with his "missing eye" towards you! (just like in his pictures, he usually kept that side facing the camera while I was snapping pictures)

4/05 Update Pops has been with us for over 5 1/2 years now. He never did decide to become bonded with another rabbit, he was simply too feisty for that. He settled for sitting next to other rabbits through his puppy pen. There have been a few rabbits who would have liked to be his friend, but he didn't like them face to face. He is still nervous around people, but he is much better than how he showed up 5 years ago! He delights in having his ears rubbed now, where before he would flinch and run. He still is afraid of people he doesn't know. Sadly, he is starting to become arthritic. We have been working with him to keep him comfortable. We are unsure of how old he is, he was an adult when he arrived.

7/05 Update Pops arthritis is getting worse but so far the pain medications are helping. He is losing much of the mobility in his legs. He is still enjoying life so we have made the decision to work with him.